Van der Valk in the Netherlands has delivered the 26-metre Dutch Falcon. The launch model for an innovative new take on the yard’s award-winning Flybridge range, she marries a proven-in-practice aluminium hull with a sleek-lined superstructure and show-stealing slabs of glass. And her highly experienced owner, a true perfectionist who has built more than 20 boats himself, is delighted with every aspect. 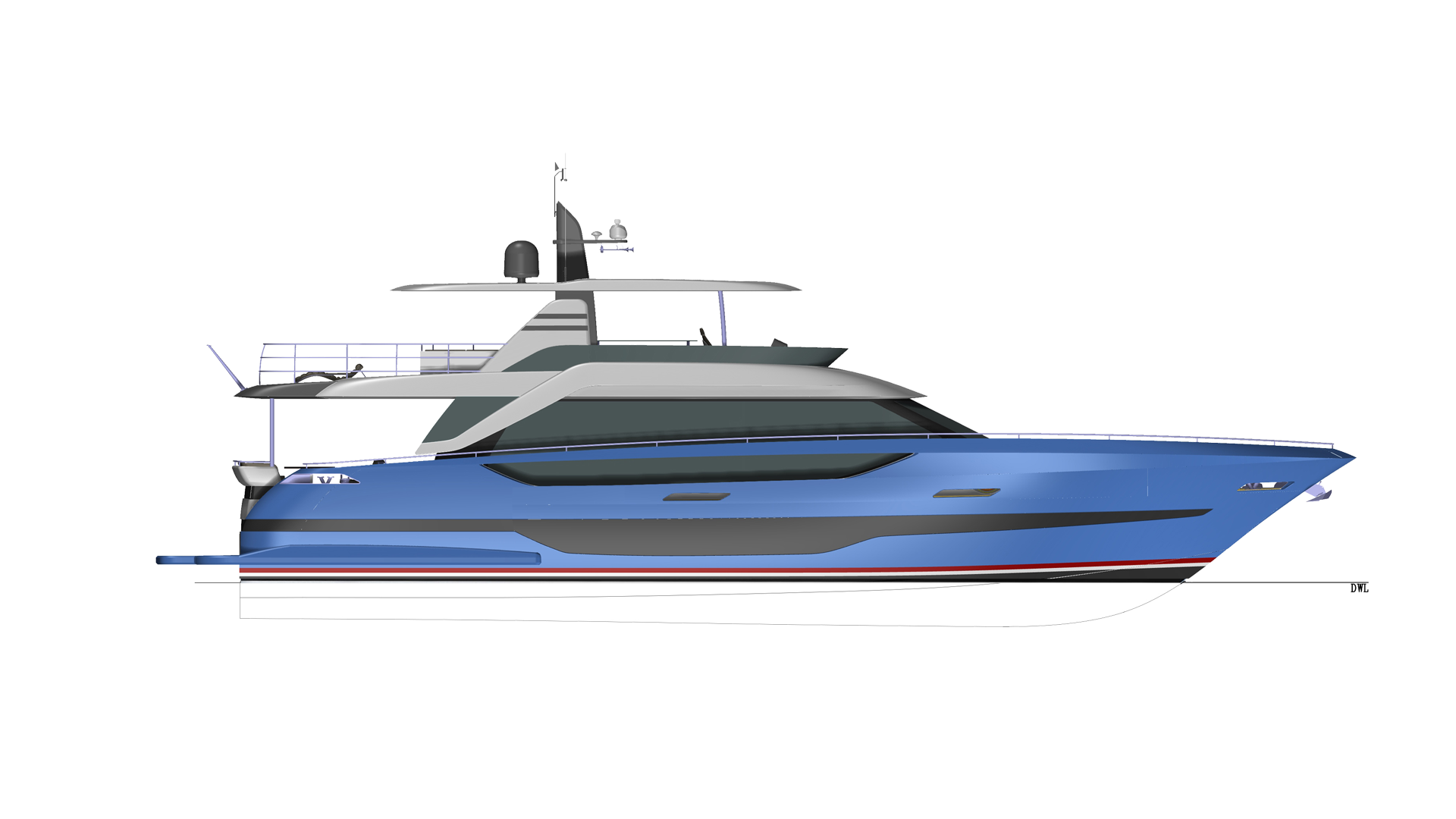 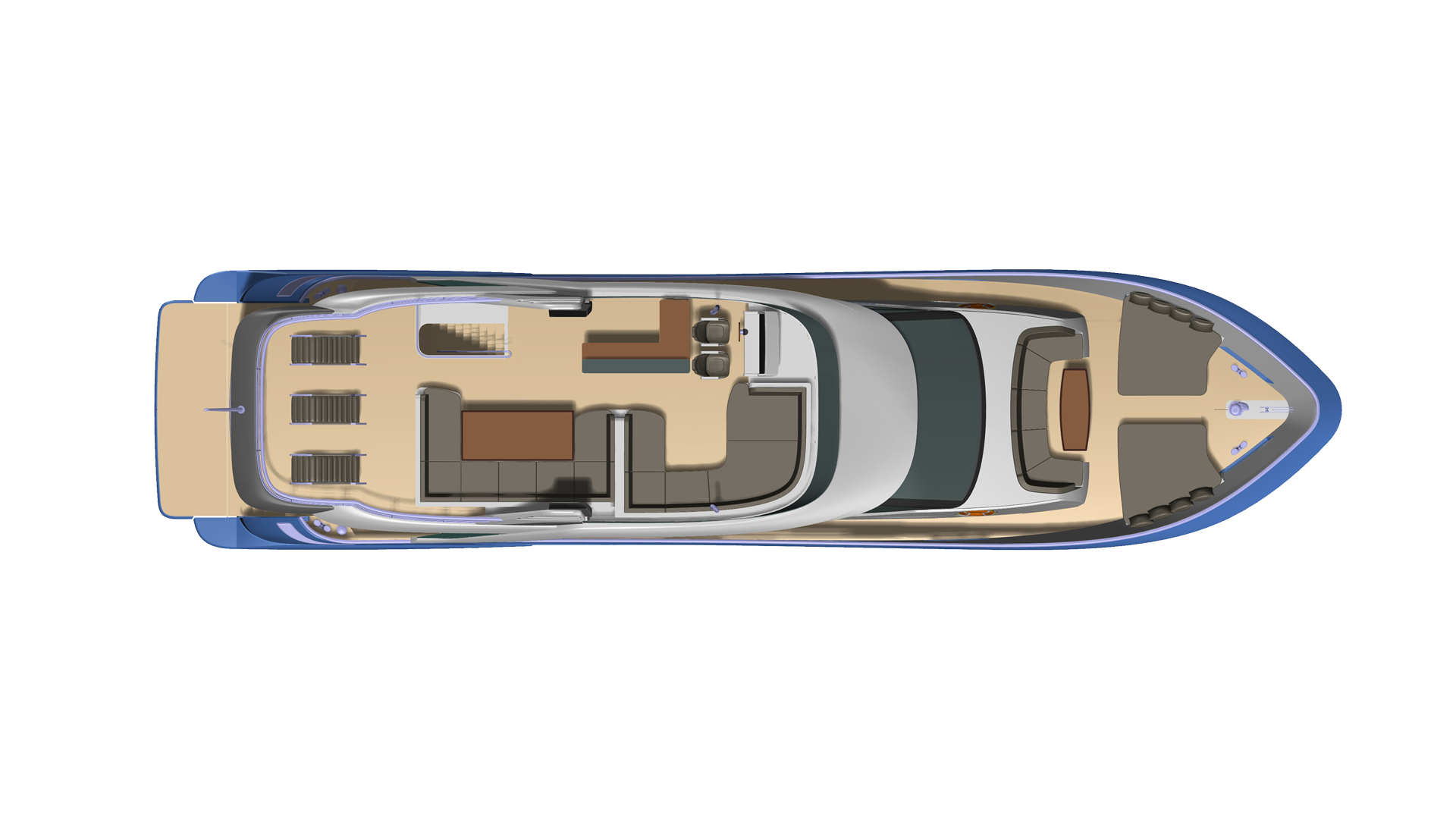 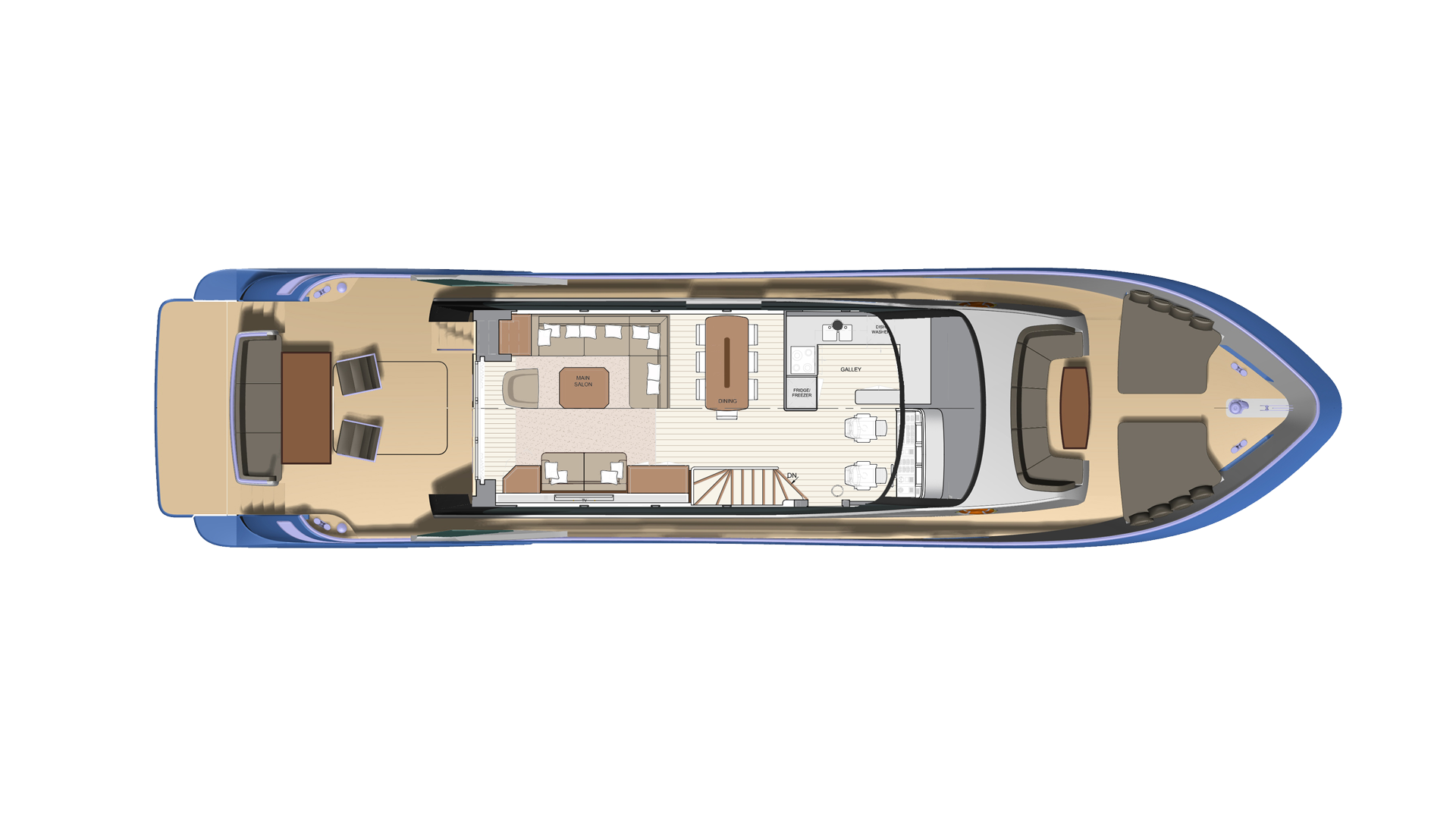 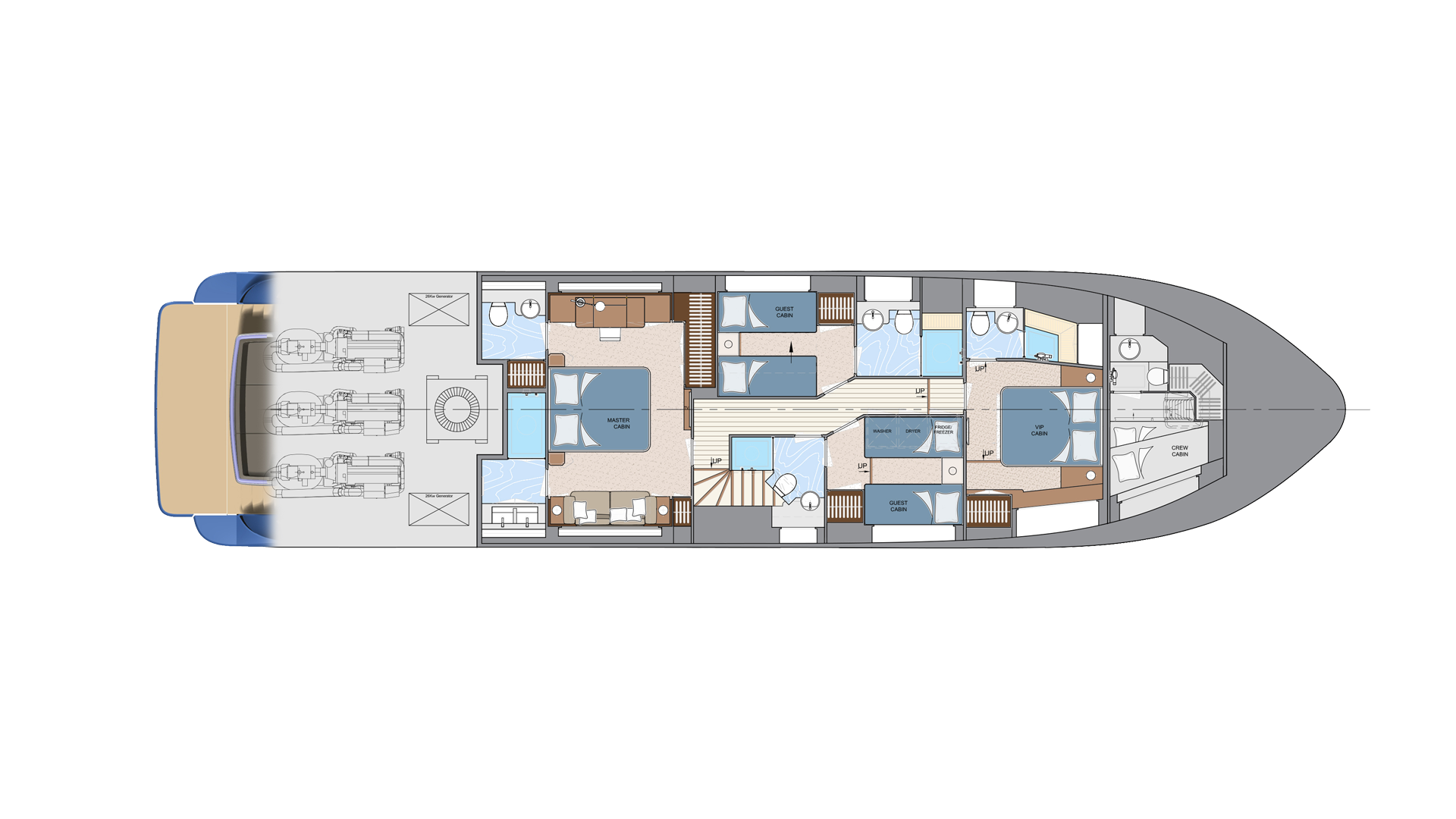 Dutch Falcon also represents a major milestone for Volva Penta as she carries the 10,000th IPS 30 drive unit. The two companies have an impressive shared history as the 20-metre Amara launched by Van der Valk in 2007 featured the first such drive on an aluminium yacht in the world. It’s a longstanding partnership in power provision that has benefitted many Van der Valk clients, including the owners of Dutch Falcon who are reaping the rewards of her triple IPS 1050 drives.

“With a wide-open throttle Dutch Falcon easily attains 25 knots,” says Yoeri Bijker, Head of Sales at Van der Valk. “That’s an impressive lick of speed for a yacht of this size and there are other benefits too. The IPS was a revolutionary system at the time of its launch and still is for the way it offers efficiency savings of around 25 percent on fuel consumption and noise. The system is also virtually plug & play, especially for yards like ours who have so much experience with installing the IPS. It’s also easy for owners to manoeuvre with a joystick in all directions and when rotating, offering the assets of a bow and sternthruster. The IPS is perfect for the kind of owner operator at the helm on Dutch Falcon.”

Smooth sailing
Comfort levels are further assured thanks to the installation of Humphree zero-speed stabilisers with carbon fibre fins, a highly efficient system when it comes to roll reduction at anchor and underway. “As they glide smoothly through the water, everyone aboard Dutch Falcon can enjoy splendid views through the floor-to-ceiling windows in the main salon,” continues Bijker. “As well as panoramic vistas on the outdoor world, this liberal use of glass creates a bright and open ambience within the interior. It also contributes to a key goal with our reimagination of the Flybridge range to reflect the way Van der Valk clients enjoy spending time on the water with family and friends.”

Room for more
The same philosophy is seen on the outer areas too. An impressive aft deck some 4.5 metres in length includes a delightful al fresco dining area and room for the owners of Dutch Falcon to place two lounging chairs in one of their favourite spots to watch the world go by. Spacious enough to easily house and launch a Williams 395 SportJet tender, the aft deck also serves as a great platform from which to go swimming.

Meanwhile, a large sunbathing area on the foredeck offers further options for all kinds of relaxation and the flybridge has many choices too with another dining area behind the exterior helm station. Flexibility is key throughout – loads of space translates into loads of choice for future owners of this Flybridge.

Signature looks
These outdoor assets are superbly blended within a new exterior profile drawn by renowned Dutch designer Cor D. Rover. His rethink of the Van der Valk Flybridge line – fifteen of which have been sold since its launch in 2007 – gives extra élan to the lines and shapes as well as bringing in more glazing to the hull and superstructure.

“These modern touches are part of a harmonious blend between classic features like the flared bow with the softer shapes of the superstructure,” adds Bijker. “The ultimate result is the kind of timeless aesthetic that has become somewhat of a signature for the Van der Valk brand. Our motoryachts are renowned for never being excessively avant-garde, always retaining an emphasis on the elegant and contemporary.”

Light infusion
Talking of elegance, Dutch Falcon has a lovely Horizon Blue metallic livery, a favourite colour of the owners that also includes tones of purple and grey. It supports the way in which the exterior design draws attention to the windows, with the gunwale dropping down to allow more natural light to infuse the interior as well as further enhance the views outside. The main salon furniture is not attached to the side walls or window mullions in order to accentuate this feeling of freedom

The entire main deck is on a single flush level, from the bridge to the aft deck via the galley, eight-seater dining room, lounge and bar. There is also a large day head here in order to keep the lower deck strictly private for those staying overnight, with room for 20 or more people to party on the main deck without needing to intrude on the accommodations.

Having a bathroom on the main deck is also handy for when people pop in from the water and prefer not to go below deck. Those who are staying onboard will certainly enjoy their sleeping quarters as Dutch Falcon has impressive volume for a 26-metre yacht. The master suite is full-beam and fitted with a vanity table (which could also be converted into an office area if desired). There are two amidships cabins, a VIP and another that can be converted from a double to a twin. The two-person crew cabin in the bow can also serve as a children’s cabin, with a connecting door to the VIP. Again, flexibility is key.

Residence on the water
Interior designer Carla Guilhem and her team have made the most of this spaciousness to create a calm and contemporary style. Mirroring the design theme of the Flybridge as a whole that revolves around relaxation and homeliness, the interior has a wealth of round shapes and organic forms.

As befits this high-end residence, a sense of comfort is established by the use of suede, leather and a range of fabrics and finishes with light natural oak wood and various wood textures and fluted panels adding to the neutral scheme. A palette of off-white and grey hues is mixed with pop-up colours in the accessories and upholstery. Dutch Falcon’s interior feels as good as it looks.

A two-level model. It was our first series made suitable for the revolutionary Volvo Penta IPS.

A product of many years of R&D, offering a complete new way of looking at space.

Long range yachts which embody a style that is classic, timeless yet quite distinctive.

Stay up to date with the latest developments. Sign up with your email address to receive news and updates. We’ll respect your privacy.

Do you want to know more?

Ask us a question

Submit your information to receive the brochure.

This website uses cookies to improve your experience while you navigate through the website. Out of these cookies, the cookies that are categorized as necessary are stored on your browser as they are essential for the working of basic functionalities of the website. We also use third-party cookies that help us analyze and understand how you use this website. These cookies will be stored in your browser only with your consent. You also have the option to opt-out of these cookies. But opting out of some of these cookies may have an effect on your browsing experience.
Necessary Always Enabled
Necessary cookies are absolutely essential for the website to function properly. This category only includes cookies that ensures basic functionalities and security features of the website. These cookies do not store any personal information.
Non-necessary
Any cookies that may not be particularly necessary for the website to function and is used specifically to collect user personal data via analytics, ads, other embedded contents are termed as non-necessary cookies. It is mandatory to procure user consent prior to running these cookies on your website.
SAVE & ACCEPT